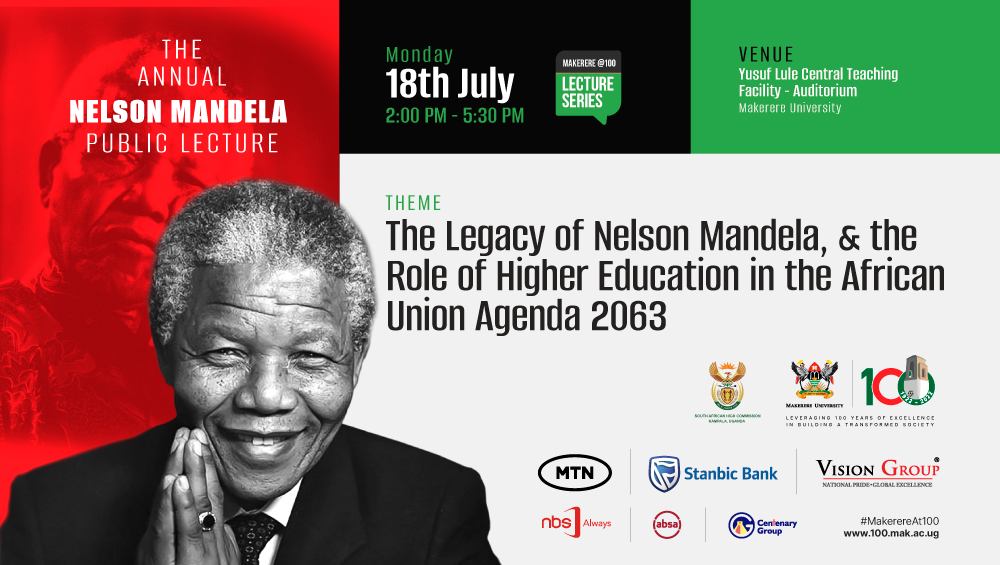 Topic: "The Legacy of Nelson Mandela & the Role of Higher Education in the African Union Agenda 2063"

The centennial year Annual Nelson Mandela Public lecture was held on Monday, 18th July 2022, in the Yusuf Lule Central Teaching Facility Auditorium under the theme, “The Legacy of Nelson Mandela and the Role of Higher Education in the African Union Agenda 2063.”

Nelson Rohilhlahla Mandela was born on 18th July 1918 and died on 5 December 2013. He was South Africa’s first black head of state. Ideologically an African nationalist and socialist, he served as the president of the African National Congress (ANC) party from 1991 to 1997. Nelson Mandela became involved in anti-colonial and African nationalist politics, joining the ANC in 1943 and co-founding its Youth League in 1944. He was arrested and imprisoned in 1962, and, following the Rivonia Trial, was sentenced to life imprisonment for conspiring to overthrow the state.He is famously quoted to have said, “Education is the most powerful weapon which you can use to change the world.”

The release of Mandela, the end of Apartheid, and his ascendency to the presidency were all significant milestones in South […]

“This year, as the university celebrates 100years of excellence, Makerere University is holding the annual Nelson Mandela Public Lecture under […]